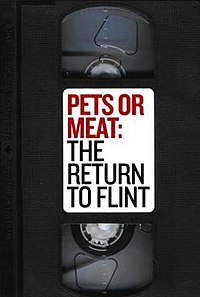 Pets or Meat: The Return to Flint is a 1992 American short PBS documentary film written, co-produced and directed by Michael Moore, featuring the director returning to his hometown of Flint, Michigan, to catch-up with some of the characters featured in his previous film Roger & Me (1989). The film's title refers to Rhonda Britton, a Flint resident featured in both films, who sells rabbits as either pets or meat.