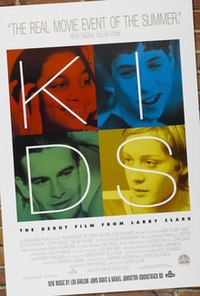 Kids is a 1995 American coming-of-age drama exploitation film directed by Larry Clark and written by Harmony Korine. It stars Leo Fitzpatrick, Justin Pierce, Chloë Sevigny, and Rosario Dawson, all in their film debuts. Primarily set during the course of one day, Fitzpatrick, Pierce, Sevigny, Dawson, and other newcomers portray a group of teenagers in New York City with hedonistic behavior toward sexual immorality and substance abuse during the year 1994.

The film begins when a boy named Telly and a 12-year-old girl are making out on a bed. With no adults around, Telly, who is a few years older, persuades the girl, who is a virgin, to have sex with him. Afterwards, he meets with his best friend, Casper, and they talk about his sexual experience. Telly has taken to only having sex with virgins.