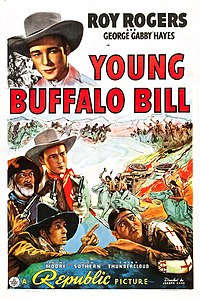 The film takes place in the New Mexico territory of the United States in the 1860s. Bill Cody and his friend Gabby Whitaker arrive in the New Mexico territory sometime in the 1860s, Gabby feels the land is worthless as it is filled with nothing but “Injins and rocks”. Bill begins discussing Buffalo until he notices a woman driving a seemingly out of control carriage. Bill and Gabby stop the horses, but the woman berates them saying she didn’t any help.