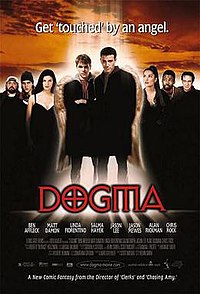 Bartleby and Loki are fallen angels, eternally banished from Heaven to Wisconsin for insubordination, after an inebriated Loki resigned as the Angel of Death at Bartleby's suggestion. In a newspaper article that arrives anonymously, the angels discover a way home: Cardinal Ignatius Glick is rededicating his church in Red Bank, New Jersey, in the image of the "Buddy Christ". Anyone who enters the church during the rededication festivities will receive a plenary indulgence, remitting all sins. Were the banished angels to undergo this rite—and then die after transmuting into human form—God would have no choice but to allow them re-entry into Heaven. They are encouraged by the demon Azrael and the Stygian triplets, three teenage hoodlums who serve Azrael in hell.