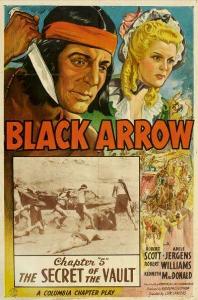 Buck Sherman and Jake Jackson, a couple of evil carpetbaggers, illegally enter a Navajo reservation to prospect for gold and end up killing Aranho, the Navajos chief. Black Arrow, presumed Aranho's son, refuses to kill the Indian agent, Tom Whitney, in revenge, as demanded by Navajo law. Black Arrow is driven off the reservation for his reluctance to kill Whitney and decides to join forces with Pancho, Mary Brent and Whitney to track down the men who killed the chief (Sherman and Jackson).