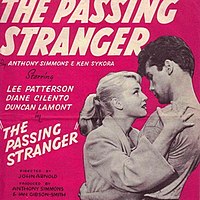 The Passing Stranger is a 1954 British crime film written and directed by John Arnold, produced by Anthony Simmons (who also wrote the original film story) and Ian Gibson-Smith, with Leon Clore serving as the film's executive producer, for Harlequin Productions. The film stars Lee Patterson, Diane Cilento and Duncan Lamont.

Chick, an American soldier serving in Europe, has deserted and is trying to find his way back to the US. After falling in with a gang of criminals, he is on the run after a robbery went wrong, and hides up at a roadside café near a small British town (Banbury). One of the owners of the café, Jill, falls for him and they make a plan to run away together.