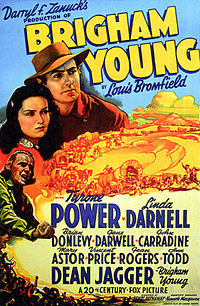 Brigham Young (also known as Brigham Young– Frontiersman) is a 1940 American biographical romantic drama film that describes Young's succession to the presidency of The Church of Jesus Christ of Latter-day Saints after founder Joseph Smith, Jr., was assassinated in 1844.

The story begins in frontier-town Nauvoo, Illinois in 1844. It follows the main body of the Church as they are forced to leave Illinois, choosing to settle temporarily in Nebraska and then to travel by wagon train to the Great Basin. Much of the story's plot revolves around two of the group, Jonathan Kent and Zina Webb.