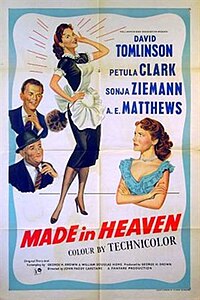 Made in Heaven is a 1952 British Technicolor comedy film directed by John Paddy Carstairs which stars David Tomlinson, Petula Clark and Sonja Ziemann. The screenplay was based on a story by William Douglas-Home.

Young married couple Basil (David Tomlinson) and Julie Topham (Petula Clark) enter the ancient annual Dummow Flitch Trials (in which a married couple can win a side of bacon if at the end of one year, they have 'not wisht themselves unmarried again'). However, the Topham's happy household, and then an entire village is thrown into chaos with the arrival of an attractive Hungarian housemaid (Sonja Ziemann).