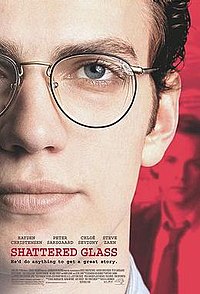 Shattered Glass is a 2003 biographical drama film about journalist Stephen Glass and his scandal at The New Republic. Written and directed by Billy Ray, the film is based on a 1998 Vanity Fair article of the same name by H. G. Bissinger and chronicles Glass' fall from grace when his stories were discovered to be fabricated. It stars Hayden Christensen as Glass, alongside Peter Sarsgaard, Chloë Sevigny, and Steve Zahn.

Stephen Glass is a reporter at The New Republic, where he has made a name for himself for writing colorful stories. His editor Michael Kelly is revered by the magazine's young staff. When David Keene (at the time Chairman of the American Conservative Union) questions Glass's description of minibars and the drunken antics of Young Republicans at a convention, Kelly backs his reporter when Glass admits to one mistake but says the rest is true.