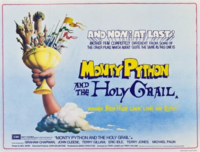 Monty Python and the Holy Grail 1975

Monty Python and the Holy Grail is a 1975 British comedy film reflecting the Arthurian legend, written and performed by the Monty Python comedy group (Chapman, Cleese, Gilliam, Idle, Jones and Palin), directed by Gilliam and Jones. It was conceived during the hiatus between the third and fourth series of their BBC television series Monty Python's Flying Circus.

In AD 932, King Arthur and his squire, Patsy, travel Britain searching for men to join the Knights of the Round Table. Along the way, Arthur debates whether swallows could carry coconuts, recounts receiving Excalibur from the Lady of the Lake, defeats the Black Knight and observes an impromptu witch trial. He recruits Sir Bedevere the Wise, Sir Lancelot the Brave, Sir Galahad the Pure and Sir Robin the Not-Quite-So-Brave-as-Sir-Lancelot, along with their squires and Robin's minstrels. Arthur leads the knights to Camelot, but, after a musical number, changes his mind, deeming it "a silly place". As they turn away, God appears and orders Arthur to find the Holy Grail.