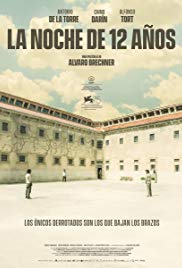 A Twelve-Year Night is a 2018 Uruguayan drama film directed by Álvaro Brechner. It premiered in Official Selection at the 75th Venice International Film Festival, and it was selected as the Uruguayan entry for the Best Foreign Language Film at the 91st Academy Awards, but it was not nominated. The film won the Golden Pyramid Award at the 40th Cairo International Film Festival.