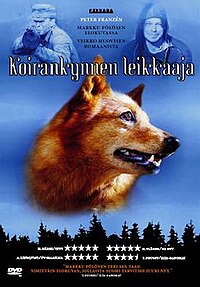 Dog Nail Clipper (Finnish: Koirankynnen leikkaaja) is a 2004 Finnish film directed by Markku Pölönen and starring Peter Franzén and Taisto Reimaluoto. The film is an adaptation of Finnish author Veikko Huovinen's 1980 novel of the same name.

Mertsi (Peter Franzén) is an intelligent young Finnish soldier fighting against the Soviet Union in World War II. During a battle in 1941, Mertsi is shot in the head and sustains substantial brain damage that leaves him unable to cope with the demands of a normal life. Two of his friends, Eetvi (Taisto Reimaluoto) and Ville (Ahti Kuoppala), try to help him by getting him employed at their places of work so that they can keep an eye on him. But both jobs — construction with Ville and logging with Eetvi — prove to be beyond Mertsi's current ability. Ville tells Mertsi about his dog back home and speaks warmly about his companionship and his concern for the dog's well-being due to the overly long claws. Mertsi decides to travel to Ville's village and take care of the dog by clipping his nails. Due to Mertsi's inability to take care of himself, his trip to the village and his stay with the dog are marked by the kindness and compassion of complete strangers who help Mertsi in his quest to make himself feel like a useful and needed member of the society.