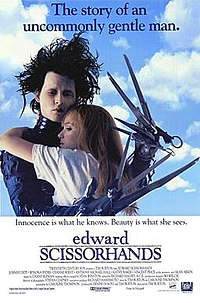 Edward Scissorhands is a 1990 American fantasy romance film directed by Tim Burton. It was produced by Burton and Denise Di Novi, and written by Caroline Thompson from a story by her and Burton. Johnny Depp plays an artificial humanoid named Edward, an unfinished creation who has scissor blades instead of hands. The young man is taken in by a suburban family and falls in love with their teenage daughter Kim (Winona Ryder). Additional roles were played by Dianne Wiest, Anthony Michael Hall, Kathy Baker, Vincent Price and Alan Arkin.

An elderly woman tells her granddaughter the story of a young man named Edward who has scissor blades for hands. As the creation of an old inventor, Edward is an artificially created humanoid who is almost completed. The Inventor homeschools Edward, but suffers a heart attack and dies before giving real hands to Edward, leaving him "unfinished" forever.