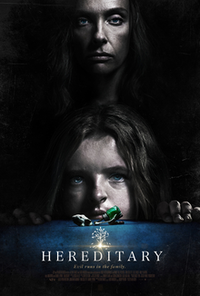 Hereditary is a 2018 American horror tragedy film written and directed by Ari Aster, in his feature film directorial debut. It stars Toni Collette, Alex Wolff, Milly Shapiro and Gabriel Byrne as a family haunted by a mysterious presence after the death of their secretive grandmother.

Annie Graham is a miniatures artist who lives in Utah with her husband, Steve; their 16-year-old son, Peter; and their eccentric and reserved 13-year-old daughter, Charlie. At the funeral of her secretive mother, Ellen Leigh, Annie delivers a eulogy explaining their fraught relationship and her mother's extremely private life. A week later, Steve is informed that Ellen's grave has been desecrated, while Annie thinks she sees an apparition of Ellen in her workshop. At a support group for the bereaved, Annie reveals that the rest of her family suffered from mental illness that resulted in their deaths and how Ellen was a significant figure in raising Charlie.