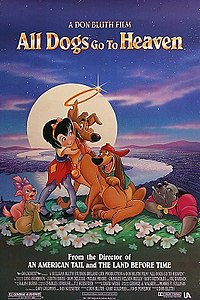 All Dogs Go to Heaven is a 1989 animated musical fantasy comedy-drama adventure film directed by Don Bluth and co-directed by Gary Goldman (his directorial debut) and Dan Kuenster. It tells the story of Charlie B. Barkin (voiced by Burt Reynolds), a German Shepherd that is murdered by his former friend, Carface Carruthers (voiced by Vic Tayback, in his penultimate film role), but withdraws from his place in Heaven to return to Earth, where his best friend, Itchy Itchiford (voiced by Dom DeLuise), still lives, and they team up with a young orphan girl named Anne-Marie (voiced by Judith Barsi in her last film role), who teaches them an important lesson about kindness, friendship and love.

In 1939 New Orleans, Charlie B. Barkin and his best friend Itchy Itchiford escape from the dog pound and return to their casino riverboat on the bayou, formerly run by Charlie himself and his business partner, Carface Caruthers. Refusing to share the profits with Charlie, Carface had been responsible for Charlie and Itchy getting committed to the pound and persuades Charlie to leave town with half of the casino's earnings. Charlie agrees, but is later intoxicated and killed by a car pushed downhill by Carface and his assistant, Killer. Charlie is sent to Heaven by default despite not having done any good deeds in his life; a whippet angel explains to him that because dogs are inherently good and loyal, all dogs go to Heaven and are entitled to paradise. Charlie cheats death by stealing a gold pocket watch representing his life and winding it back. As Charlie descends back to Earth, the whippet angel tells him that he can never return to Heaven; when the watch stops again, he will be sent to Hell instead. However, as long as the watch continues to run, Charlie will be immortal.