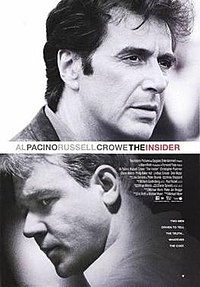 The Insider is a 1999 American drama film directed by Michael Mann, from a screenplay adapted by Eric Roth and Mann from Marie Brenner's 1996 Vanity Fair article "The Man Who Knew Too Much". It stars Al Pacino and Russell Crowe, with supporting actors including Christopher Plummer, Bruce McGill, Diane Venora and Michael Gambon.

During a prologue, a CBS producer, Lowell Bergman, convinces the founder of Hezbollah, Sheikh Fadlallah, to grant an interview to Mike Wallace for 60 Minutes. While preparing for the interview, both Wallace and Bergman firmly stand their ground against the Sheikh's armed and hostile bodyguards' attempted intimidation and disruption.