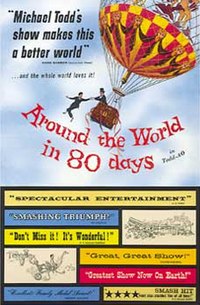 Around the World in 80 Days (sometimes spelled as Around the World in Eighty Days) is a 1956 American epic adventure-comedy film starring Cantinflas and David Niven, produced by the Michael Todd Company and released by United Artists.

Broadcast journalist Edward R. Murrow presents an onscreen prologue, featuring footage from A Trip to the Moon (1902) by Georges Méliès, explaining that it is based loosely on the book From the Earth to the Moon by Jules Verne. Also included is the launching of an unmanned rocket and footage of the earth receding.