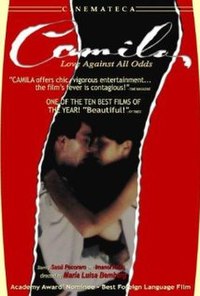 The film opens with "In memory of Camila O'Gorman and Ladislao Gutiérrez".