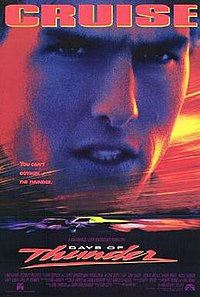 Cole Trickle is a young racer from Eagle Rock, California, with years of experience in open-wheel racing, winning championships with the World of Outlaws. Originally setting his sights on the Indianapolis 500, Cole realizes that "To win in Indy I'd need a great car, but stock cars are all the same". He is recruited by Chevrolet dealership tycoon Tim Daland to race for his team in the NASCAR Winston Cup Series. Daland brings former crew chief and car builder Harry Hogge out of retirement to lead Cole's pit crew (Harry had left NASCAR a year prior to avoid investigation of the death of driver Buddy Bretherton). After Cole sets a fast time in a private test at Charlotte Motor Speedway, Hogge builds him a new Chevrolet Lumina.