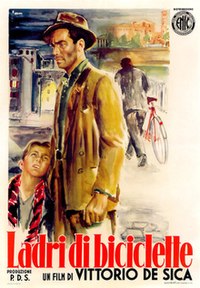 Bicycle Thieves (; sometimes known in the United States as The Bicycle Thief) is a 1948 Italian neorealist drama film directed by Vittorio De Sica. It follows the story of a poor father searching post-World War II Rome for his stolen bicycle, without which he will lose the job which was to be the salvation of his young family.

In the post-World War II Val Melaina neighbourhood of Rome, Antonio Ricci (Lamberto Maggiorani) is desperate for work to support his wife Maria (Lianella Carell), his son Bruno (Enzo Staiola) and his small baby. He is offered a job of pasting advertising bills but tells Maria that he cannot accept because the job requires a bicycle. Maria resolutely strips the bed of her dowry bedsheetsprized possessions for a poor familyand takes them to the pawn shop, where they bring enough to redeem Antonio's pawned bicycle.