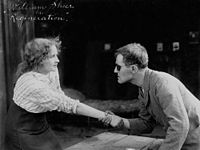 Regeneration (alternately called The Regeneration ) is a 1915 American silent biographical crime drama co-written and directed by Raoul Walsh. The film, which was the first full-length feature film directed by Walsh, stars

The film is a "candid adaptation" of the autobiography of Owen Frawley Kildare, called the Kipling of the Bowery. The story follows the life of Owen (Rockliffe Fellowes), a young Irish American boy who is forced into a life of poverty after his mother dies. As a result, Owen is forced to live on the street eventually turning to a life of crime. Owen is eventually reformed, however, by the benevolent social worker Marie Deering (Anna Q. Nilsson). Also featured is a fire aboard an excursion ferry, much like the General Slocum disaster of 1904.