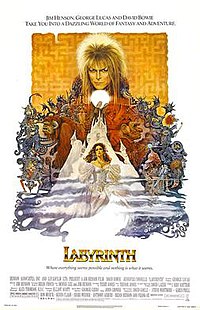 Labyrinth is a 1986 musical fantasy film directed by Jim Henson, with George Lucas as executive producer, based upon conceptual designs by Brian Froud. It revolves around 16-year-old Sarah's (Jennifer Connelly) quest to reach the center of an enormous otherworldly maze to rescue her infant brother Toby, whom Sarah wished away to Jareth, the Goblin King (David Bowie). Most of the film's significant characters, apart from Bowie and Connelly, are played by puppets produced by Jim Henson's Creature Shop.

16-year-old Sarah Williams recites from a book titled The Labyrinth in the park with her dog Merlin but becomes distracted by a line she is unable to remember while being watched by a barn owl. Realizing she is late to babysit her baby half-brother Toby, she rushes home and is confronted by her stepmother Irene, who then leaves for dinner with Sarah's father Robert. Sarah finds Toby in possession of her treasured childhood teddy bear, Lancelot. Frustrated by this and his constant crying, Sarah rashly wishes Toby be taken away by the goblins. She is shocked when Toby disappears and Jareth, the Goblin King, arrives. He offers Sarah her dreams in exchange for the baby, but she refuses, having instantly regretted her wish. Jareth reluctantly gives Sarah 13 hours to solve his labyrinth and find Toby before he is turned into a goblin forever. Sarah meets a dwarfish man named Hoggle, who aids her in entering the labyrinth. She has trouble finding her way at first, but meets a talking worm who inadvertently sends her in the wrong direction.