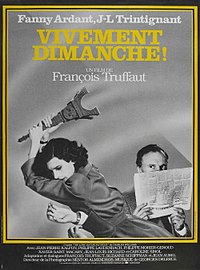 Confidentially Yours (French title: Vivement dimanche!, known as Finally, Sunday! in other English-speaking markets) is a 1983 French thriller that was the final film directed by François Truffaut. Based on the novel The Long Saturday Night by the American author Charles Williams, it tells the story of Julien Vercel, an estate agent who is suspected of murdering his wife and her lover. As Vercel is hidden in his office, his secretary Barbara Becker investigates these suspicious murders. It was Truffaut's last film, he died the next year, aged 52, after being diagnosed with a brain tumour. The film had a total of 1,176,425 admissions in France and was the 39th highest-grossing film of the year.

Julien Vercel, a real estate agent in the south of France, is hunting for ducks by the lake, while a man named Massoulier, who hunts in the same area, is shot dead. Julien returns to his office unaware but is soon questioned by the police. He learns that he is the main suspect, because when he left the hunt, he saw Massoulier's parked car, turned its lights off to save the battery and closed one of the door upon which he left fingerprints. Furthermore, the deceased Massoulier and Julien's wife, Marie-Christine had a secret relationship. When he confronts his wife later at home, she nonchalantly confirms her adultery. While Marie-Christine hides, Julien is taken to the police station for a second interview but is released with the help of his lawyer, Clement who drives him home. In the meantime, Marie-Christine has been murdered. Julien is now the prime suspect. In an effort to prove his innocence he wants to go to Nice, where his wife previously worked, but his secretary, Barbara Becker, argues that she should do the research on his behalf. She does so cunningly when her boss falls asleep in the office. Barbara is secretly in love with her boss, whereas Julien seems to have been indifferent to her.