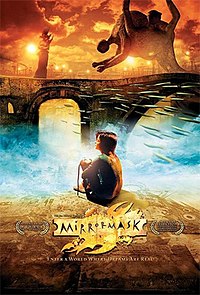 MirrorMask is a 2005 dark fantasy film designed and directed by Dave McKean and written by Neil Gaiman from a story they developed together. The film stars Stephanie Leonidas, Jason Barry, Rob Brydon, and Gina McKee.

Helena Campbell (Stephanie Leonidas) works with her parents Joanne and Morris (Gina McKee and Rob Brydon) at their family circus, but desires to run away and join real life. At the next performance, after Helena and Joanne have a heated argument, Joanne collapses and is taken to the hospital. Ten days later, while Helena is staying with her grandmother, she finds that the doctors determine that Joanne requires an operation, and Helena can only blame herself for the situation.