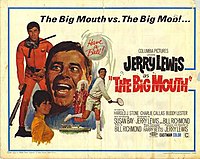 The Big Mouth is a 1967 American comedy film produced, directed, co-written, and starring Jerry Lewis released on July 12, 1967 by Columbia Pictures. It was filmed in San Diego and features Frank De Vol as an onscreen narrator.

Gerald Clamson (Lewis) is a bank examiner who loves fishing on his annual two-week holiday. Unfortunately, one day at the ocean he reels in Syd Valentine (also played by Lewis), an injured gangster in a scuba diving suit. Syd tells Gerald about diamonds he has stolen from the other gangsters and hands him a map. Gerald escapes as frogmen from a yacht machine-gun the beach. They swim ashore, locate Syd and gun him down. Their leader Thor (Harold J. Stone) ensures Syd's demise by firing a torpedo from his yacht that goes ashore, blowing a crater into the beach.