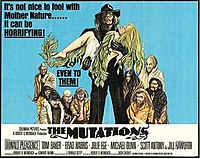 The Mutations is a low-budget 1974 British-American science fiction/horror film directed by Jack Cardiff. The film was also released under the title The Freakmaker.

This movie directed by Academy Award-winning cinematographer/director Jack Cardiff in the 1970's depicts a deranged genetic scientist, Professor Nolter (Donald Pleasence), a man with self proclaimed noble to break through to the next stage in human evolution, through the crossbreeding cannibalistic Venus flytraps with abducted college students guinea pigs from his own class. "I'll create a race of plants that can walk, and men that can take root," through an exploitation of certain nucleic acids . The failed experimental mutants are then given to a cruel circus freakshow owner, Mr. Lynch (Tom Baker known for Dr. Who) who exploits them to the fullest. However, the mutants and the circus freaks will not be denied justice. Inspired by Tod Browning's film Freaks with a science fiction twist, this film is full of pseudo scientific jargon, stop motion visuals, makeup effects, references to psychedelics, comical gore, nudity, and by the standards of modern viewers a distasteful exploitation of actors with actual genetic disabilities as well as some made up disabilities including a man with rubber-bones known as the Human Pretzel, a lady with reptilian skin (Alligator Lady), the Monkey Woman, the Human Pincusion and Popeye.. Nonetheless it grabs attention among the other scenes of "freaks" it depicts a reversed stop motion capture of the professor reviving a moldy orange, and the professor feeding a bunny rabbit to a Venus flytrap. A dissonant and jumbled orchestral score composed by Basil Kirchen provides a perfect dissident backdrop to accompany visuals of gore, circus freaks, and accenting the overacting and dramatics of the actors in this intriguing 1970's horror film which has been restored on DVD after decades of floating in obscurity.