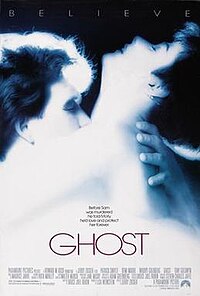 Sam Wheat, a banker, and his girlfriend Molly Jensen, a potter, renovate and move into an apartment in Manhattan with the help of Sam's friend and co-worker Carl Bruner. One afternoon, Sam confides in Carl his discovery of unusually high balances in obscure bank accounts. He decides to investigate the matter himself, declining Carl's offer of assistance. That night, Sam and Molly are attacked by a mugger who shoots and kills Sam in a scuffle before stealing his wallet. Sam sees Molly crying over his body and discovers he is now a ghost, invisible and unable to interact with the mortal world.