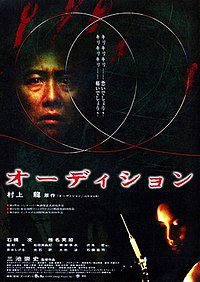 is a 1999 Japanese horror film directed by Takashi Miike, based on the 1997 novel by Ryu Murakami. It is about a widower, Shigeharu Aoyama (Ryo Ishibashi), whose son suggests that he should find a new wife. Aoyama agrees, and with a friend, stages a phony audition to meet a potential new partner in life. After interviewing several women, Aoyama becomes interested in Asami (Eihi Shiina), who responds well to him, although as they begin to date, her dark past begins to affect their relationship.

Shigeharu Aoyama, a middle-aged widower, is urged by his 17-year-old son, Shigehiko, to begin dating again. Aoyama's friend Yasuhisa Yoshikawa, a film producer, devises a mock casting audition at which young women audition for the "part" of Aoyama's new wife. Aoyama agrees to the plan and is immediately enchanted by Asami Yamazaki, attracted to her apparent emotional depth.