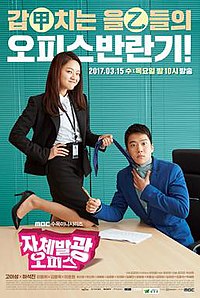 Radiant Office is a 2017 South Korean television series starring Go Ah-sung and Ha Seok-jin. The series is written by a rookie screenwriter who won the 2016 MBC TV Drama Screenplay Competition in Miniseries category. It aired on MBC from March 15 to May 4, 2017 on Wednesdays and Thursdays at 22:00 (KST) for 16 episodes.