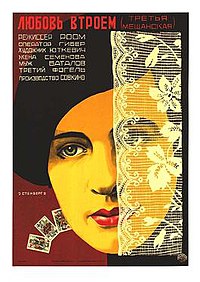 Bed and Sofa is the English name of a 1927 Soviet silent film originally released in the Soviet Union as Tretya meshchanskaya, and is sometimes referred to as The Third Meschanskaya. In addition to the title, Bed and Sofa it was also released outside of the Soviet Union under the alternate titles of Three in a Cellar, Old Dovecots, and Cellars of Moscow. The film gets its Russian title from the street on which the main characters live, Third Meshchanskaia Street.

The story centers on the relationship of the three main characters. Liuda and her husband, Kolia, live in a one-room basement apartment on Third Meschchanskaya Street, a petty-bourgeois neighborhood in Moscow. She is bored and resentful with the constant succession of household duties and the cramped living conditions in which she must cook and attempt to organize her clothes, even though there is no place to put them. She spends her days idly, mostly by reading magazines, notably the popular (at that time) Soviet film fan magazine Soviet Screen (Sovetskii ekran). Kolia works as a stonemason and is charming and good-natured, but also dictatorial and egocentric. When Kolia's old friend, Volodia, arrives in Moscow, he cannot find a place to live in the overcrowded city, due to a severe housing shortage which was still a major social problem ten years after the revolution. Kolia invites him to stay at their apartment, to sleep on the sofa.