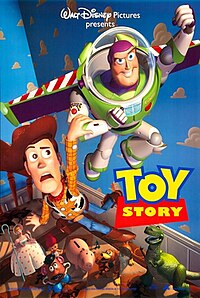 Toy Story is a 1995 American computer-animated buddy comedy film produced by Pixar Animation Studios and released by Walt Disney Pictures. The feature film directorial debut of John Lasseter, it was the first entirely computer-animated feature film, as well as the first feature film from Pixar. The screenplay was written by Joss Whedon, Andrew Stanton, Joel Cohen, and Alec Sokolow from a story by Lasseter, Stanton, Pete Docter, and Joe Ranft. The film features music by Randy Newman, was produced by Bonnie Arnold and Ralph Guggenheim, and was executive-produced by Steve Jobs and Edwin Catmull. It features the voices of Tom Hanks, Tim Allen, Don Rickles, Wallace Shawn, John Ratzenberger, Jim Varney, Annie Potts, R. Lee Ermey, John Morris, Laurie Metcalf, and Erik von Detten. Taking place in a world where anthropomorphic toys come to life when humans are not present, the plot focuses on the relationship between an old-fashioned pull-string cowboy doll named Woody and an astronaut action figure, Buzz Lightyear, as they evolve from rivals competing for the affections of their owner Andy Davis, to friends who work together to be reunited with him after being separated from him.

In a world where toys are living things but pretend to be lifeless when humans are present, a group of toys, owned by young Andy Davis, are caught off-guard when Andy's birthday party is moved up a week, as his family (including his mother and infant sister Molly) are preparing to move the following week. Andy's toys – including Bo Peep the shepherdess, Mr. Potato Head, Rex the dinosaur, Hamm the piggy bank and Slinky Dog – fear that they will be replaced by new toys from the birthday. Sheriff Woody – the toys' leader and Andy's favorite toy – sends out army men, led by Sarge, to spy on the party and report the gift results to the others with baby monitors. The toys are relieved when the party appears to end with none of them being replaced by new toys, but then Andy receives a surprise gift – a Buzz Lightyear action figure, who thinks that he is a real space ranger.