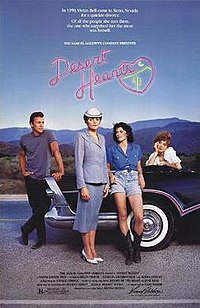 Desert Hearts is a 1985 American romantic drama film directed by Donna Deitch. The screenplay written by Natalie Cooper is an adaptation of the 1964 lesbian-themed novel Desert of the Heart by Jane Rule. Set in Reno, Nevada in 1959, it tells the story of a university professor awaiting a divorce who finds her true self when she meets a free-spirited younger woman self-confident in her romantic and sexual attraction. The film stars Helen Shaver and Patricia Charbonneau with a supporting performance by Audra Lindley.

In 1959, Vivian Bell, a 35-year-old English professor at Columbia University in New York City, travels to Reno to establish residency in Nevada (a process that takes six weeks), in order to obtain a quickie divorce. She stays at a guest house ranch for women who are waiting for their divorces to be finalized. The ranch is owned by Frances Parker.