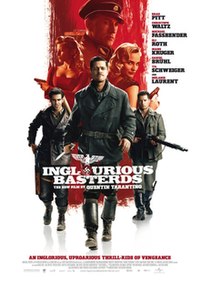 Inglourious Basterds is a 2009 war film written and directed by Quentin Tarantino, starring Brad Pitt, Christoph Waltz, Michael Fassbender, Eli Roth, Diane Kruger, Daniel Brühl, Til Schweiger and Mélanie Laurent. The film tells an alternate history story of two plots to assassinate Nazi Germany's leadership—one planned by Shosanna Dreyfus, a young French Jewish cinema proprietor, and the other by the British; but is ultimately conducted solely by a team of Jewish American soldiers led by First Lieutenant Aldo Raine. Christoph Waltz co-stars as Hans Landa, an SS colonel in charge of tracking down Raine's group. The title was inspired by Italian director Enzo G. Castellari's 1978 Euro War film The Inglorious Bastards, though Tarantino's film is not a remake of it.

In 1941, SS-Standartenführer Hans Landa interrogates French farmer Perrier LaPadite as to the whereabouts of a Jewish family, the Dreyfuses. Landa suspects the LaPadites are hiding them under their floorboards, and in exchange for the Nazis not murdering his family, LaPadite tearfully confirms it. Landa's soldiers shoot through the floorboards, killing all but Shosanna Dreyfus, who escapes.