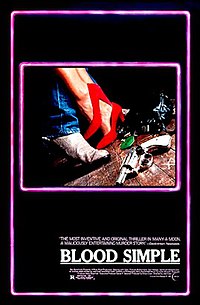 Blood Simple is a 1984 American independent neo-noir crime film written, edited, produced, and directed by Joel and Ethan Coen. It was the directorial debut of the Coens and the first major film of cinematographer Barry Sonnenfeld, who later became a noted director, as well as the feature-film debut of Joel Coen's wife Frances McDormand, who subsequently starred in many of his features.

Ray, bartender at Marty's Bar, and Abby are driving through a heavy downpour at night, discussing Abby's bad marriage. They arrive at a motel, where they have sex. Lorren Visser, a private detective hired by Abby's husband, Julian Marty to follow Abby, takes photos of the tryst and delivers them to Marty.