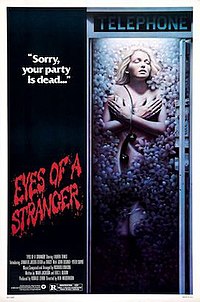 Eyes of a Stranger is a 1981 American slasher film directed by Ken Wiederhorn. It features makeup effects by Tom Savini and marked the film debut of Jennifer Jason Leigh.

The film centers around a rapist and murderer in Miami who stalks his victims and then calls them repeatedly before raping and killing them. The movie opens with a body being discovered under water. After the introduction of the dead body, the film begins to follow the murderer stalking a blonde woman on her way home. The murderer begins calling the woman which leads to her calling the police. Before the police could get there, both she and her boyfriend were murdered. While the murders continue, Jane, the television reporter, figures out who the killer is and decides to capture him herself. Jane finds herself in the killer's apartment searching for evidence to share with the police.