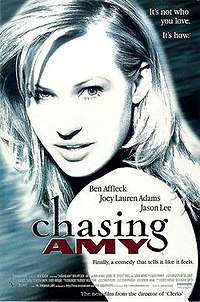 Chasing Amy is a 1997 American romantic comedy-drama film written and directed by Kevin Smith and starring Ben Affleck, Joey Lauren Adams, and Jason Lee. The film is about a male comic artist (Affleck) who falls in love with a lesbian woman (Adams), to the displeasure of his best friend (Lee). It is the third film in Smith's View Askewniverse series.

Holden McNeil (Ben Affleck) and Banky Edwards (Jason Lee) are comic book artists and lifelong best friends. They meet fellow comic book artist Alyssa Jones (Joey Lauren Adams) at a comic book convention in New York City, where they are promoting their comic Bluntman and Chronic. Holden is attracted to Alyssa, but soon learns that she is a lesbian. The two begin spending time together, and a deep friendship develops. Eventually, Holden is no longer able to contain his feelings, and confesses his love to Alyssa. She is initially angry with him, but that night, the two sleep together and begin a romantic relationship.