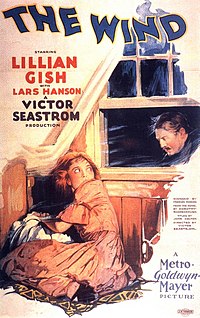 The Wind is a 1928 American silent romantic drama film directed by Victor Sjöström. The movie was adapted by Frances Marion from the 1925 novel of the same name written by Dorothy Scarborough. Featuring Lillian Gish, Lars Hanson and Montagu Love, it is one of the last silent films released by Metro-Goldwyn-Mayer and is considered to be among the greatest silent films.

An impoverished young woman named Letty Mason (Lillian Gish) travels west by train from Virginia to live at her cousin Beverly's isolated ranch in Sweetwater, Texas. On the way, she is bothered by the constantly blowing wind. Fellow passenger and cattle buyer Wirt Roddy (Montagu Love) makes her acquaintance and tells her the wind usually drives women crazy.