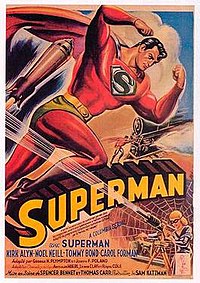 Superman is a 1948 15-part black-and-white Columbia Pictures film serial based on the comic book character Superman. It stars an uncredited Kirk Alyn (billed only by his character name, Superman; but credited on the promotional posters) and Noel Neill as Lois Lane. Like Batman (1943), it is notable as the first live-action appearance of Superman on film, and for the longevity of its distribution. The serial was directed by Thomas Carr, who later directed many early episodes of the Adventures of Superman television series, and Spencer Gordon Bennet, produced by Sam Katzman, and shot in and around Los Angeles, California. It was originally screened at movie matinées, and after the first three scene-setting chapters, every episode ends in a cliffhanger. The Superman-in-flight scenes are animations, in part due to the small production budget.

Superman is sent to Earth by his parents just as the planet Krypton blows up and is later raised as Clark Kent by a farm couple. They discover that he has great powers so they send him off to use his powers to help those in need. After his foster parents die, the Man of Steel heads to Metropolis under the bespectacled guise of Kent and joins the staff of the Daily Planet in order to be close to the news. Soon after he is sent out to get the scoop on a new rock that a man has found that he calls Kryptonite, and Clark passes out; then and there Superman discovers that his weakness is Kryptonite. Whenever emergencies happen, he responds in his true identity as Superman. This first serial revolves around the nefarious plot of a villain who calls herself the Spider Lady.