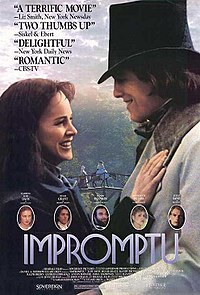 Impromptu is a 1991 British-American period drama film directed by James Lapine, written by Sarah Kernochan, produced by Daniel A. Sherkow and Stuart Oken, and starring Hugh Grant as Frédéric Chopin and Judy Davis as George Sand. The film was shot entirely on location in France as a British production by an American company. The main location used was at the Chateau des Briottières outside of Angers, in the Loire Valley.

Since getting divorced, Baroness Amantine-Lucile-Aurore Dupin, previously Baroness Dudevant, the successful and notorious writer of sensational romance novels now living under the pseudonym George Sand, in Paris, has been in the habit of dressing like a man. In her romantic pursuit of the sensitive Chopin, whose music she fell in love with before seeing him in person, George/Aurora is advised that she must act like a man pursuing a woman, though she is also advised to avoid damaging his health by not pursuing him at all. With this advice Sand is deterred by a fellow countrywoman who pretends to be smitten with Chopin, the mistress of Franz Liszt, the Countess Marie d'Agoult. Whether the Countess is really in love with Chopin is unlikely; she seeks only to prevent a relationship between Chopin and Sand.