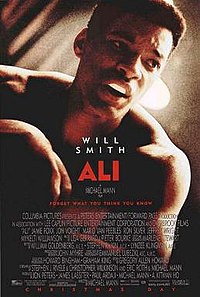 Ali is a 2001 American biographical sports drama film co-written, produced and directed by Michael Mann. The film focuses on ten years in the life of the boxer Muhammad Ali, played by Will Smith, from 1964 to 1974, featuring his capture of the heavyweight title from Sonny Liston, his conversion to Islam, criticism of the Vietnam War, and banishment from boxing, his return to fight Joe Frazier in 1971, and, finally, his reclaiming the title from George Foreman in the Rumble in the Jungle fight of 1974. It also touches on the great social and political upheaval in the United States following the assassinations of Malcolm X and Martin Luther King Jr.

The film begins with Cassius Clay Jr. before his championship debut against then-heavyweight champion Sonny Liston. Clay taunts Liston, then dominates the early rounds of the match. Halfway through, he complains of a burning feeling in his eyes (implying that Liston has tried to cheat) and says he is unable to continue. However, his trainer/manager Angelo Dundee gets him to keep fighting. Once Clay is able to see again, he dominates the fight and Liston quits before round seven, making Clay the second-youngest heavyweight champion at the time after Floyd Patterson.