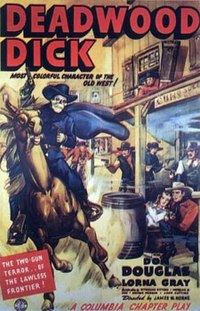 Deadwood Dick, a masked and mysterious hero, is in reality Dick Stanley, editor of the Dakota Pioneer Press and a leading member of Statehood For Dakota. He is on the trail of a masked villain known as the Skull, who leads a violent, renegade band infamous for its violence against the Deadwood residents' wishes for a statehood status. Our hero soon discovers that the Skull terrorizes the town to prevent statehood from being achieved in order to build his own empire in the vast territory. However, Dick suspects that one of his fellow committeemen might be responsible for the string of criminal acts. It takes him 15 episodes and about 40 choreographed slugfests to finally uncover the truth and reward the Skull's villainy with an exemplary punishment.