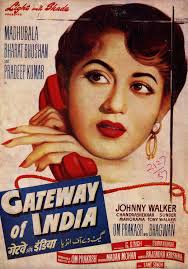 Gateway of India is a 1957 Indian Hindi language comedy crime and black and white film directed and produced by Om Prakash and cinematographed by G. Singh. The film is edited by Dharamvir and music is composed by Madan Mohan. It features Madhubala in the lead role. Bharat Bhushan, Pradeep Kumar, Johnny Walker, Anita Guha, and Master Bhagwan play supporting characters.

Anju (Madhubala) overhears her uncle (Sham Lal) plotting to kill her, for her father's property, but before he does so he must find the all important documents, which she and her loyal servant have hidden.