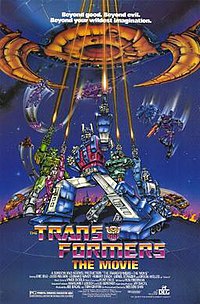 The Transformers: The Movie 1986

The Transformers: The Movie is a 1986 animated film based on the Transformers television series. It was released in North America on August 8, 1986, and in the United Kingdom on December 12, 1986. It was co-produced and directed by Nelson Shin, who also produced the television series. The screenplay was written by Ron Friedman, who created The Bionic Six a year later.

In 2005, the evil Decepticons have conquered the Transformers' home planet of Cybertron. The heroic Autobots, operating from Cybertron's two moons, prepare a counter-offensive. Autobot leader Optimus Prime sends a shuttle to Autobot City on Earth for supplies. Decepticons led by Megatron kill the crew and hijack the ship. In Autobot City, Hot Rod, relaxing with human Daniel Witwicky, spots the hijacked shuttle and a battle breaks out, resulting in casualties on both sides. Optimus arrives with reinforcements. He and Megatron engage in brutal combat, leaving both mortally wounded. On his deathbed, Optimus passes the Matrix of Leadership to Ultra Magnus, telling him that its power will light the Autobots' darkest hour.