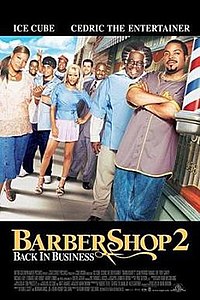 Barbershop 2: Back in Business is a 2004 American comedy film directed by Kevin Rodney Sullivan and released by Metro-Goldwyn-Mayer on February 6, 2004. A sequel to 2002's Barbershop and a second film in the Barbershop film series, also from State Street producing team Robert Teitel and George Tillman, Jr., Barbershop 2 deals with the impact of gentrification on the reputation and livelihood of a long-standing south Chicago barbershop.

Since the events of the previous film, Calvin Palmer, Jr. (Ice Cube) has finally settled comfortably into his role as the owner of the inner city barbershop founded by his grandfather and father. The shop's latest threat comes from overzealous developer Quentin Leroux (Harry Lennix) who opens a rival barbershop chain across the street, called "Nappy Cutz".