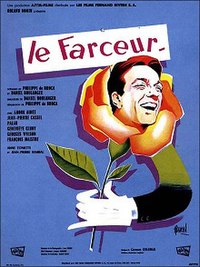 The Joker is a 1960 French comedy film directed by Philippe de Broca.

Edouard Berlon is a young, incorrigible seducer who moves very lightly from one affair to the next. He meets Helene Larouch, a woman married to André, a rich financier who is very busy with his affairs, leaving her in an emotionally arid life. Initially Helene resists Edouard's wooing, but as she gets to know his lively character, his eccentric lifestyle and his very unusual family environment, including his old uncle Théodose, his brother Pilou, servat Olga, some infants, and a few stray dogs, she lets herself become seduced. Their relation, however, turns out to be an ephemeral one as Edouard is busy seducing another woman.