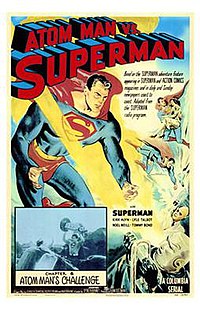 Atom Man vs. Superman is a 1950 Columbia Pictures film serial and the second Superman movie serial featuring Kirk Alyn, credited (as with the previous serial) only by his character name, Superman.

Lex Luthor, the Atom Man, invents a number of deadly devices to plague the city, including a disintegrating machine which can reduce people to their basic atoms and reassemble them in another place. But Superman manages to thwart each scheme. Since Kryptonite can rob Superman of his powers, Luthor decides to create a synthetic Kryptonite and putters about obtaining the necessary ingredients: plutonium, radium and the undefined 'etc.' Luthor places the Kryptonite at the launching of a ship, with Superman in attendance. He is exposed to the Kryptonite and passes out. Superman is taken off in an ambulance driven by Luthor's henchmen, and he is now under the control of Luthor. Superman is placed in a device, a lever is pulled, and the Man of Steel vanishes into "The Empty Doom".