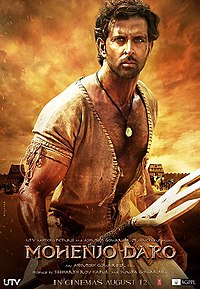 Mohenjo Daro is a 2016 Indian Hindi-language period action-adventure film written and directed by Ashutosh Gowariker. Produced by Siddharth Roy Kapur for UTV Motion Pictures and The Walt Disney Company India and Sunita Gowariker for Ashutosh Gowariker Productions (AGPPL), and starring Hrithik Roshan and Pooja Hegde. It is a cinematic presentation based on the ancient Indus Valley civilization, and its city Mohenjo-daro, a UNESCO World Heritage Site.

The film opens in 2016BCE with Sarman (Hrithik Roshan), a young man from the village of Amri, who lost his parents at a young age. Sarman kills a crocodile that has been terrorizing his village's fishermen and is hailed as a hero. He asks his uncle, Durjan (Nitish Bharadwaj), to allow him to go to Mohenjo Daro to trade their family's goods, but his uncle refuses. Sarman attempts to sneak away to the city at night with his friend Hojo (Umang Vyas), but is caught by Durjan, who relents and allows both friends to go. He gives Sarman a seal that contains an inscription of a unicorn that Sarman often sees in his dreams, suggesting he use it only once in a life or death situation.