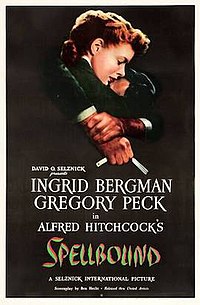 Spellbound is a 1945 American psychological mystery thriller film noir directed by Alfred Hitchcock. It tells the story of the new head of a mental asylum who turns out not to be what he claims. The film stars Ingrid Bergman, Gregory Peck, Michael Chekhov and Leo G. Carroll. It is an adaptation by Angus MacPhail and Ben Hecht of the novel The House of Dr. Edwardes (1927) by Hilary Saint George Saunders and John Palmer.

Dr. Constance Petersen is a psychoanalyst at Green Manors, a therapeutic community mental hospital in Vermont. She is perceived by the other doctors as detached and emotionless. The director of the hospital, Dr. Murchison, is being forced into retirement, shortly after returning from an absence due to nervous exhaustion. His replacement is Dr. Anthony Edwardes, who turns out to be surprisingly young. Petersen is immediately smitten with Edwardes.