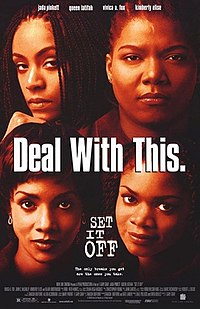 Set It Off is a 1996 American crime action heist film directed by F. Gary Gray and written by Kate Lanier and Takashi Bufford. The film stars Jada Pinkett, Queen Latifah, Vivica A. Fox, and Kimberly Elise (in her film debut). It follows four close friends in Los Angeles, California, who plan to execute a bank robbery—each doing so for different reasons—to achieve better for themselves and their families.

Francesca "Frankie" Sutton (Fox) is a Los Angeles bank teller who is fired after a robbery, because she recognized one of the robbers, although she did not personally know him. Frankie goes to work at Luther's Janitorial Services with her three best friends, Lida "Stony" Newsom (Pinkett), Cleopatra "Cleo" Sims (Latifah), and Tisean "T.T." Williams (Elise). The owner, Luther, treats them with disrespect and pays them paltry wages.