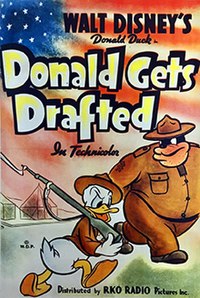 Donald Gets Drafted is a 1942 American animated short film produced by Walt Disney Productions and released by RKO Radio Pictures. The cartoon has Donald Duck being drafted into the U. S. Army during World War II and follows his introduction to military life. The film was directed by Jack King and introduced the song "The Army's Not the Army Anymore" by Carl Barks and Leigh Harline. The voice cast includes Clarence Nash as Donald, John McLeish as an officer, and Billy Bletcher as Pete who is Donald's drill sergeant.

Filled with enthusiasm, Donald reports to his local draft board after receiving a draft notice. Along the way, he passes several recruiting posters that romanticize military life. Especially intrigued by one for the Air Force, featuring attractive women and the promise of escorting them around, Donald decides that he "wants to fly". After arriving at the draft board, Donald expresses his desire to join the Army Air Forces, adding excitedly, "I came from a family of aviators!" The desk officer directs Donald to a room where he is to undergo a physical examination.